Pekin  Ducks. . .the base breed for meat x

I believe Pekin ducks to have a character all of their own. For a heavy duck they are quite active and very gregarious. That's not to say they are as busy as a Runner or a Magpie but mine are continually on the move searching in long grass and dabbling in the mud.....oh! how they like mud ; just like any other duck. When I first kept them they were reluctant to get right into a pond mainly I think because they needed a gentle ramp to get themselves out ; with this they love the water especially when the ponds are drained and refilled.

Unfortunately the feather type on Pekins is different from most other ducks as it is so soft and fluffy and not so tight. This often results in them losing feather quality quickly in bad / muddy weather and clean fresh bedding is a must. Feather quality can be improved by good feeding during the moult.....I like to feed extra vitamins ( not extra protein) and plenty of grass meal.

Breeding and Fertility .......I don't find a problem. One drake can take up to five ducks and I worry about fertility if it drops below 75%. Ducklings grow on well without too many problems except from the occasional sticky eye and lameness; normally both due to too hot and dry summers.......both are easily rectified.

Selection of Stock, ......like any other self coloured bird is not easy for the inexperienced eye. Until 8 /10 weeks I don't even try. First I discard any bird with black spots on their bill . Next too long a bill.... a definite fault to avoid as is little rise from the base of the bill to the top of the head. Select a bird with a domed head and short stout head... much like a call duck. The next round of selection is not very easy and takes time. Next to go are the tall slim types, any with keels, rear end too high off the ground and those with too low a carriage. I also prefer a duck with a strong tick in their tail and no prominent shoulder. Birds which meet these criteria I keep over winter, I don't breed from or select breeding stock until after they have finished moulting at about 18 months. Despite being very demanding in selection I normally keep between 15 / 40 adult birds just because of their appeal. White ducks are eye caching especially Pekins with their upright penguin stance and wobbly walk . Their jaunty tail, high set sparkling eyes, and chatty nature and almost regal appearance. For anyone seeking another breed of duck I can recommend Pekins you won't regret it . by Colin Murton
BREEDING CONDITIONS: Kept as pairs or alternatively trios..depending upon the drakes energy levels. They lay one possibly two clutches per year.......thus will not sit and brood if the eggs are removed. Excellent fliers as are all bantam ducks clip or net new stock until familiar with the territory. 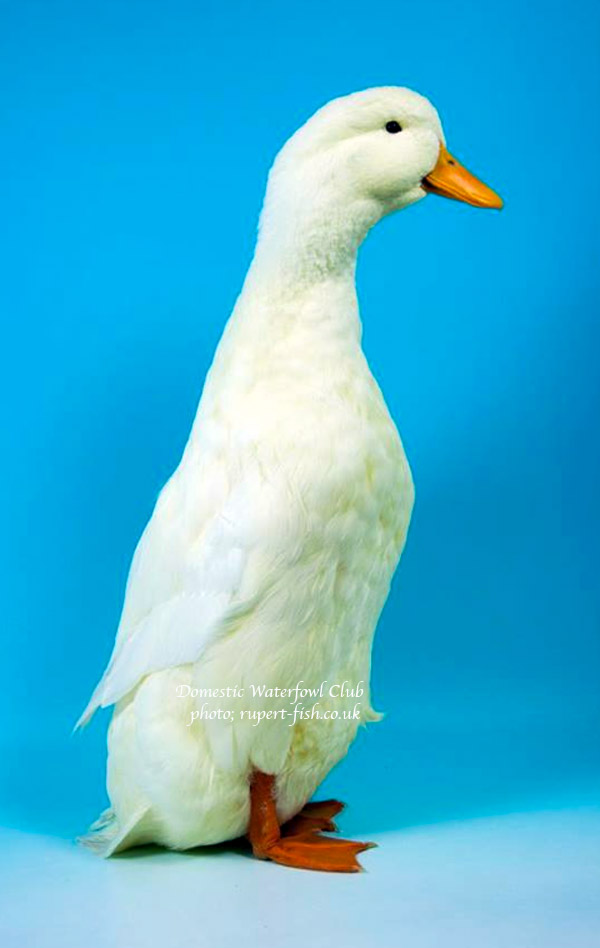 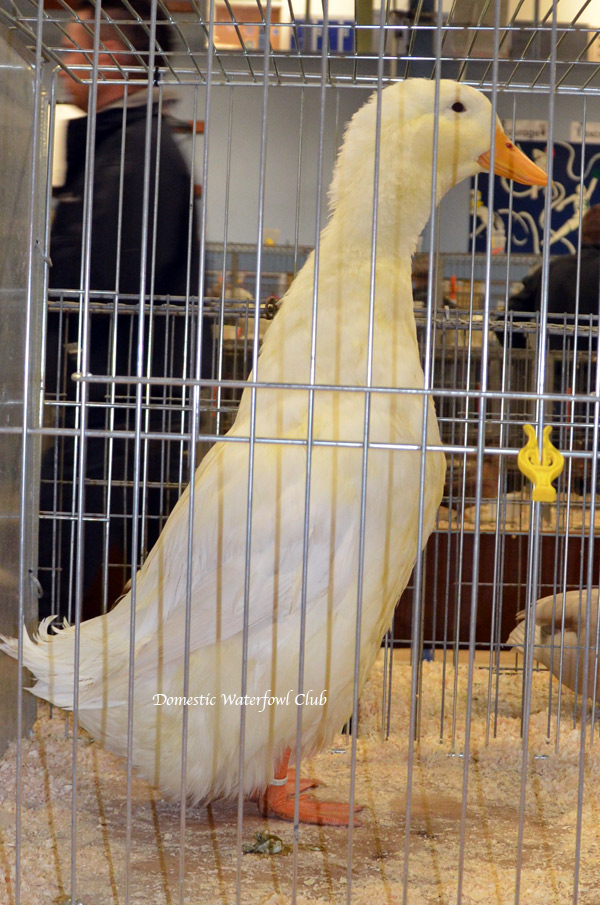 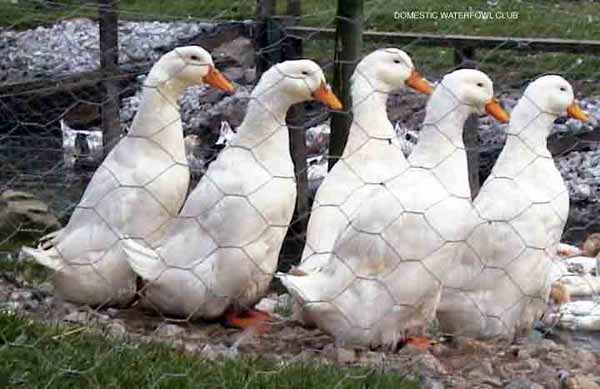 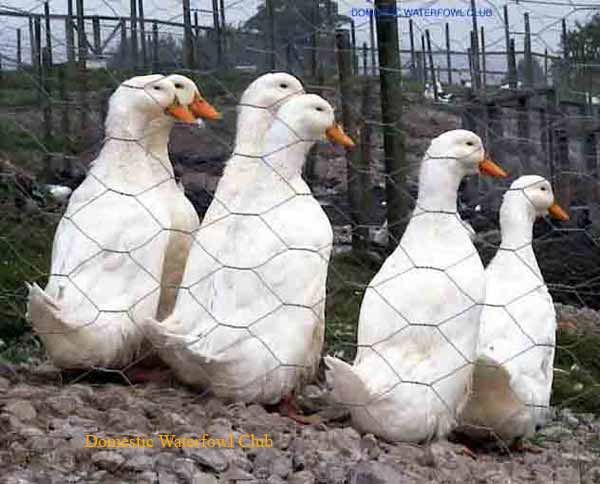 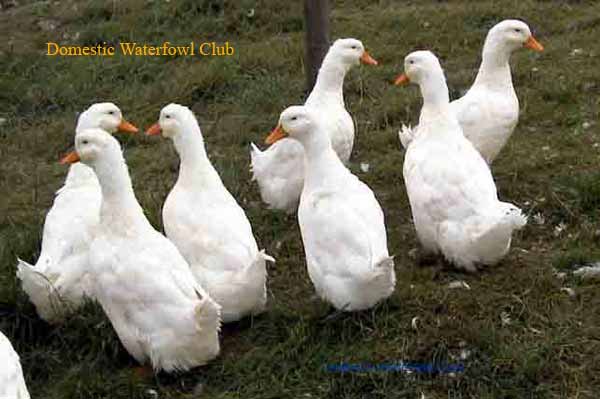 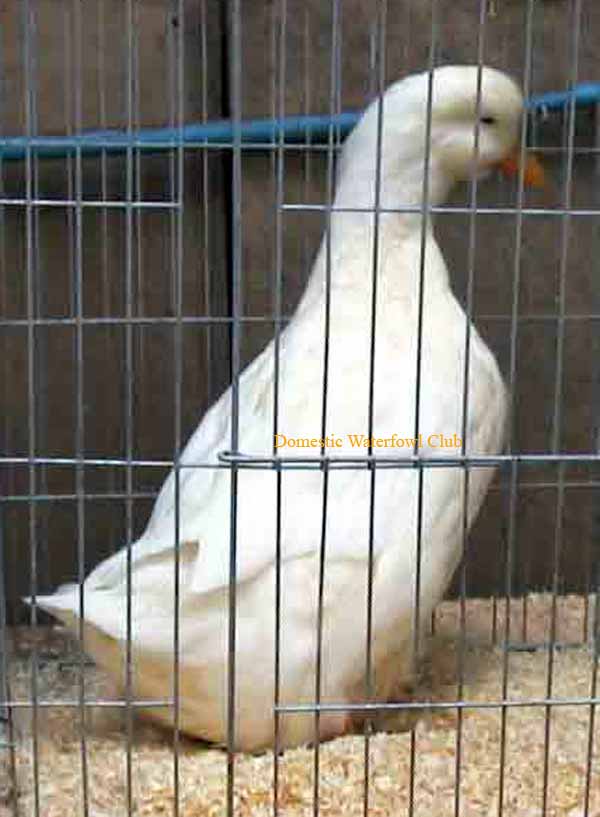 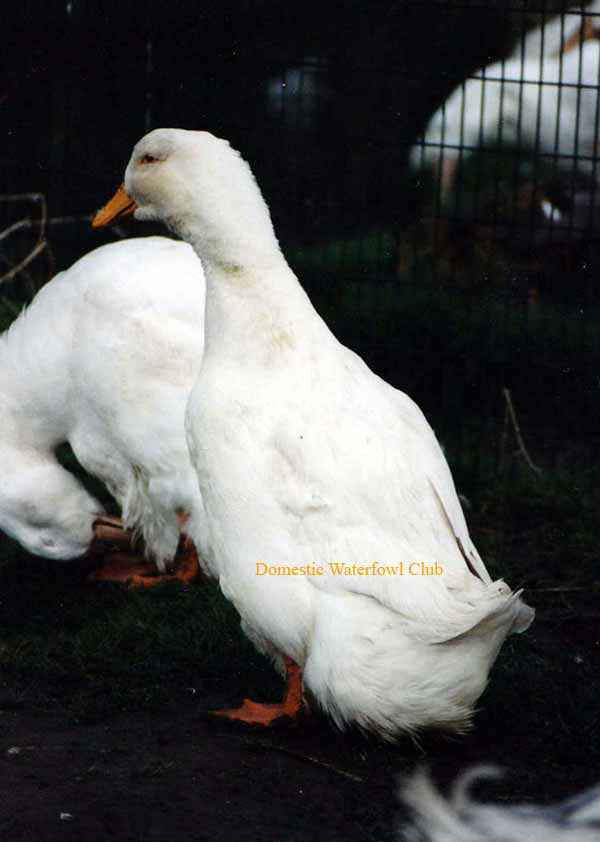 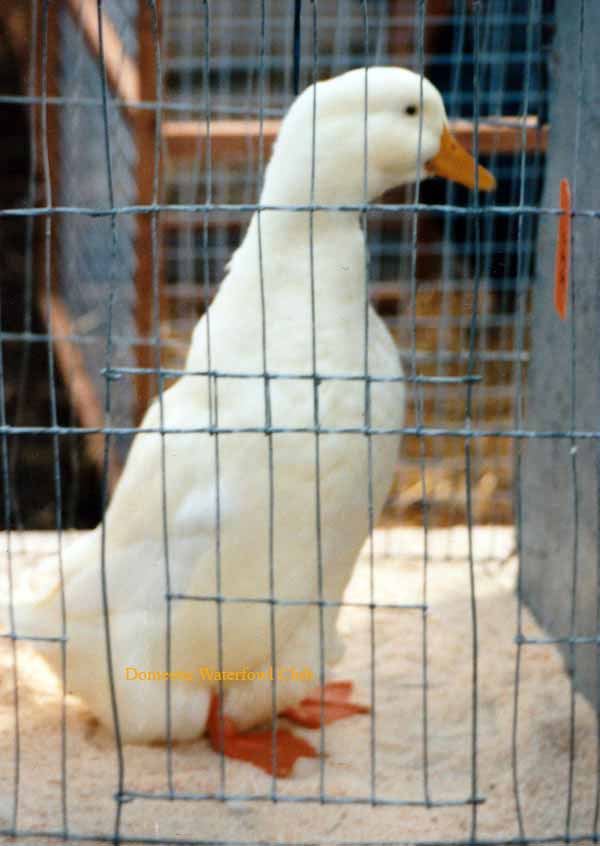 Breed History; . . .
The following article is reprinted from Lewis Wright"Practical Poultry Keeping"  also in the New Book of Poultry and most others as he just repackaged his data in shorter or longer format with new pictures
This breed was imported from Pekin into both England and the United States, in the year 1873, and has most marked characteristics. One of these is the strong yellow blood. Both legs and bill are deep orange colour, and the plumage a kind of ferret-white, with a strong canary tinge, which becomes stronger still in the underfeather. The legs are set on rather far behind, which gives an upright or Penguin carriage. Another feature is the boat-shape of the long and deep keel, which, with a fulness of rump and peculiar turn-up at the tail, irresistibly suggests the shape of an Indian birch canoe. Yet another peculiarity lies in the fact that the duck is, as arule (though there are exceptions), a non-sitter and prolific layer. At one time birds were shown with white plumage and pale bills, but which,no doubt, were crossed with Aylesbury; and the canary tinge is now fully recognized.

This is a most useful duck, but does nots eem to be bred to nearly as high a standard in England as in America, where it is the breed universally used now by the duck-farmers. In England a large-looking bird often weighs no more than 8 lb., though large specimens are exhibited of greater weight, and some breeders average the eggs at 8o per annum, others less. On the American duck-farms birds of l 1 lb. and more are quite common, in adults, andthe average in eggs from many hundred ducks is reported from three of the largest farms as 135, 140 and 145 per duck. But these are theresults of breeding and selecting the bird, on a large scale, as the Aylesbury is bred with us.

The Pekin grows fast and early, and in America is expected to weigh 5 lb. at eight weeks. It is a little wild or free in habit, and does not fatten well in small pens; hence the larger American yards or pens mentioned in the above remarks. The flesh is particularly free from grossness. We are inclined to believe that the greater weight and growth in America as compared with England, is partly owing to the recognition of its freer habits; but still more largely to the use of green food and bran along with Indian meal (maize), which probably keeps the digestive organs in more active exercise.

From Biggle in 1895 in the USA " The Pekin is an Asiatic variety having been first imported from Pekin, China, in 1873. The plumage is white with a creamy-yellow shading, the feathers being downy and fluffy like Asiatic chickens. While the "Standard" gives their weights as a pound lighter than Rouens or Aylesburys, they are commonly regarded as a larger duck than either. The introduction of the Pekins to this country gave a new impetus to duck breeding, and many persons have entered into it on an extensive scale.While they are prolific layers of large eggs, mostly white-shelled, they are also the great market duck. Their bills and shanks are a deep orange-yellow and their skin also is yellow. As the plumage is white and the pinfeathers leave no stain on the flesh, they make the finest dressed carcass of any variety

Wright 1901 "It is rather doubtful whether the first importations were made into England or America, Pekin Mr. Palmer in the United States and Ducka. Mr. Keele in England having both imported birds in 1873, and both exhibiting them in 1874 ; but in each case there is no doubt they came from Pekin, and were from the first a most well-marked variety, though they bred freely with other ducks. 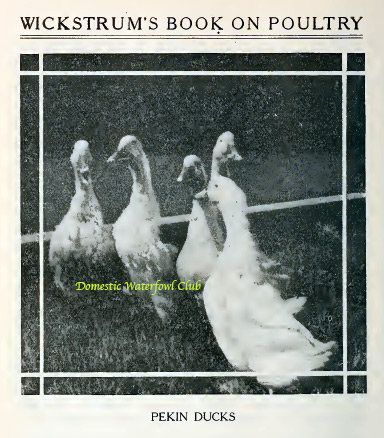 1910 First standards  from the American Standard of Perfection

We need a baby pic anyone !?