Genetically a KC with two recessive genes showing a brown dilution harlequin phase. As both the Khaki and the harlequin have the dusky / brown dilution and the sex linked genes then they have the brown rather than blue specula (wing feathers) ..
The most brightly plumaged of the lighter breeds with an adult bird sized the same as a Campbell . They follow the bill colouring of the Abacots with the male and female separately coloured which can help those not vent sexing the young. They are good layers and reasonable mothers and make good sociable back garden ducks rarely flying and foraging well.
****If it has blue wing bars it is NOT a Harlequin*** this is the first thing to alter if not pure so easy to check
Names . Known in France and Italy as Welsh Harlequin !
Country Of Origin;......... Wales
Carriage; Similar to the Campbell ducks but a substantially more well built duck ie useful for the table if needed
Purpose;..........Eggs..Meat...Broody...a good utility duck
Egg Colour; .....................The eggs weigh 65 g and are white if not get supicious
Egg Numbers..............250 /300 if lucky 120+ if not
Breed Defects. .. . . check for bronze ie brown wing bars if blue or green not WH
Defects... . . . . . .the most nervous breed needs protection from foxes and dogs ie congenitally stupid but cute. . . I keep them with large slow chickens to calm them down
Breed Hints....Kept as trio or pair .. will go broody and hatch
Weights;5 to 6 pounds. This is an average size bird (weight of the duck: 2,5 kg; of the drake: 3 kg).
Breed Tip****Meat Production: (Drakes)Will reach table weight on food and scraps by 16 weeks then not put on nay weight until 2yrs +
Flying .rarely flies a good back garden all rounder;
Appearance:Drakes, Bill, greenish blue Legs, orange Wing Bars,bronze not green  or blue-
Ducks, Bill, greenish slate Legs, orange/brown Wing Bars, bronze green
Size: Drakes, 2.26 - 2.49 kg
Ducks, 2.04 - 2.26 kg

Needs: Dry bedding, protection from the weather and predators (very stupid as a breed); good food and water. Do not require water for swimming to stay healthy, but they do enjoy it. Placid docile bird not put off laying easily 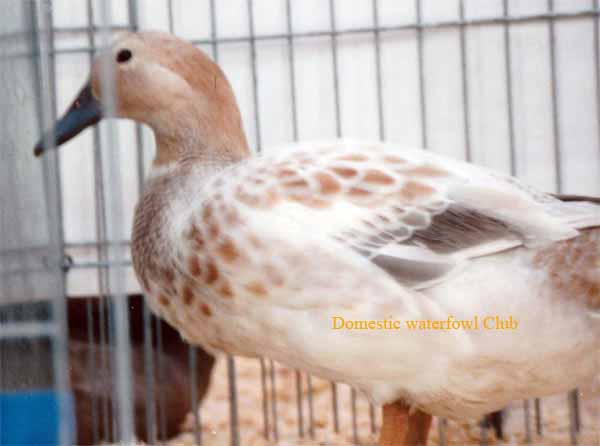 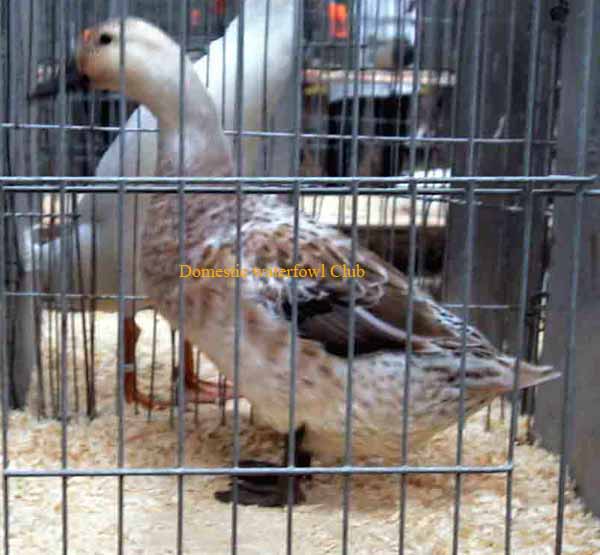 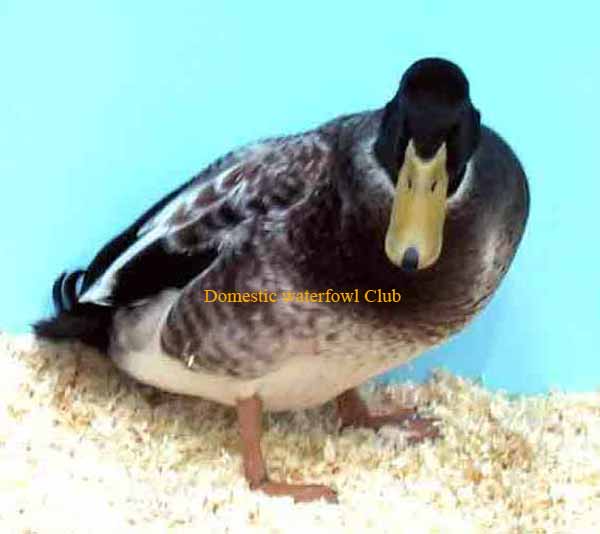 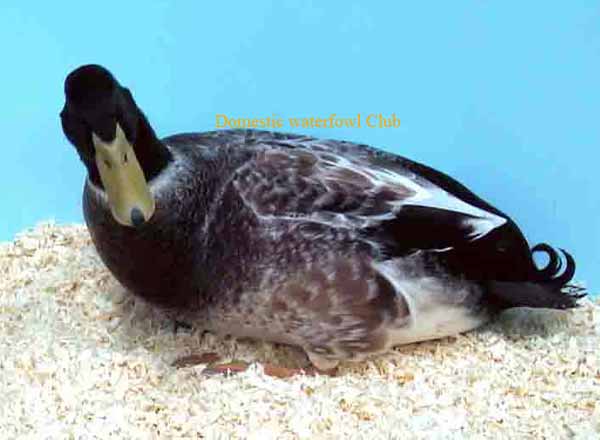 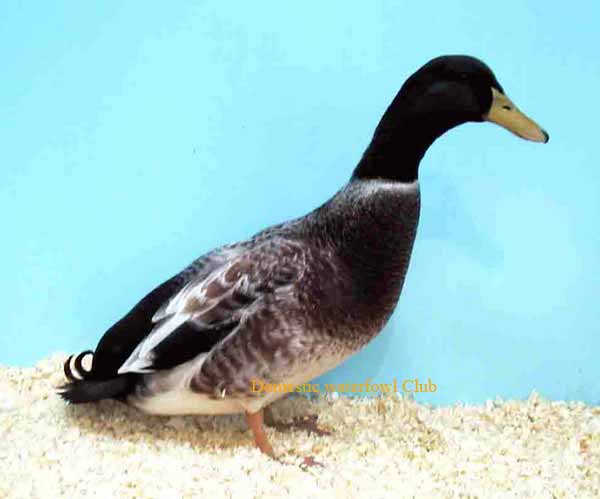 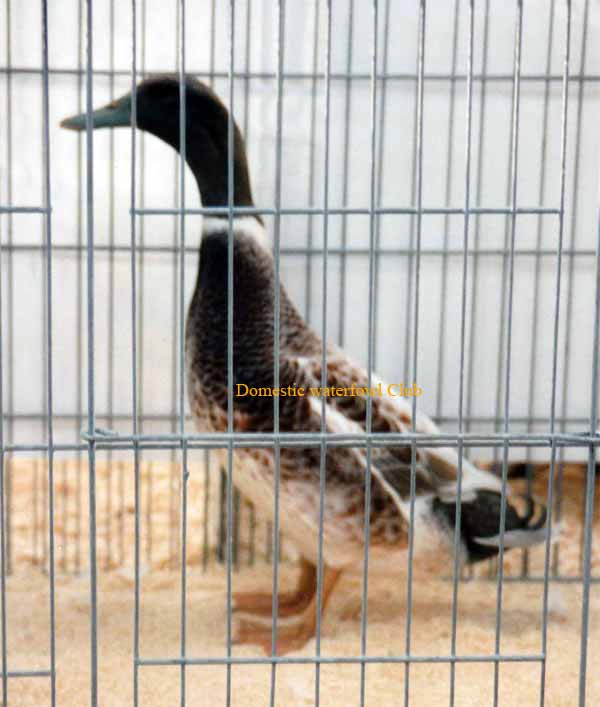 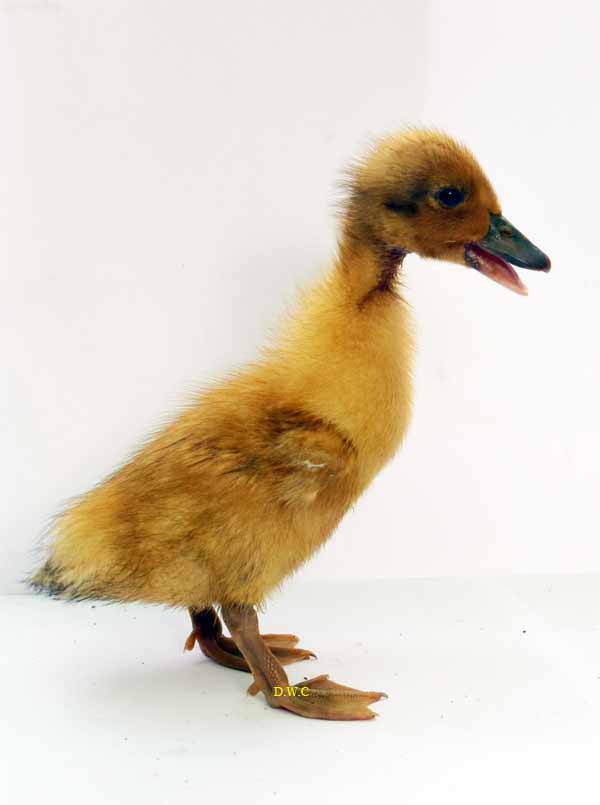 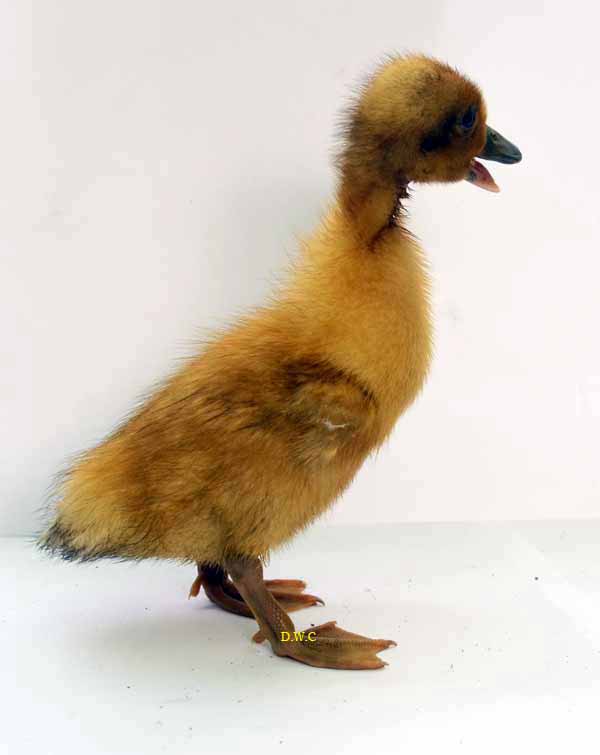 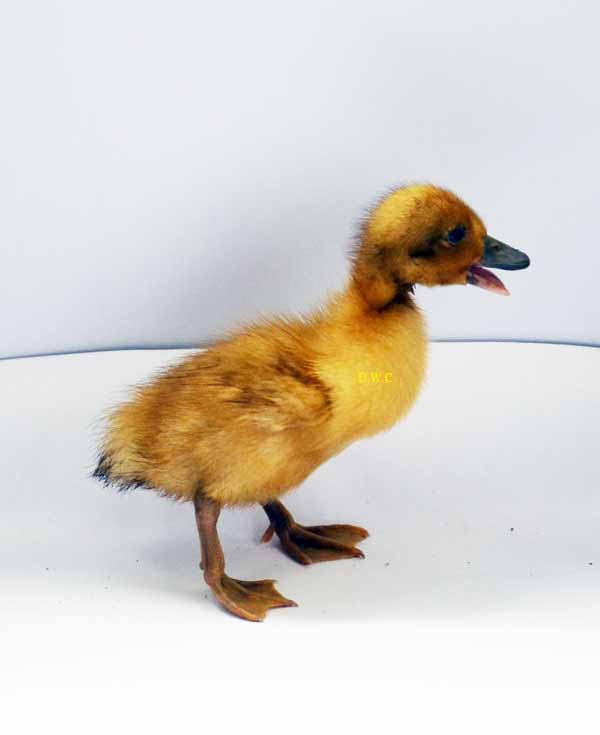 In Criccieth, Bonnet  developed his interest in duck breeding. He created a new duck breed, the Welsh Harlequin from a colour mutation from a flock of Khaki Campbells. Bred from 2 sorts of Khaki Campbell stock  their original name was Honey Campbells and they seem to have been a natural sport crossed into the vanished Coaley Fawn.When Captain Bonnet moved to Wales he renamed them Welsh Harlequins they are not an old breed... it was developed in Wales in 1949 and described by  Leslie Bonnet as from two mutant light colored ducklings hatched from pure Khaki Campbells   He  details this in his 1960 book ( p115->).They had a problem in the 1960's with low numbers and the original line  was saved by Edward Grayson in Lancashire . He had some of the original Bonnet strain  and put these back to Khaki Campbells .  It is the only true Welsh breed of duck. Bonnet later created the Whalesbury Duck a cross between an Aylesbury Duck and a Welsh Harlequin.
Genetically a KC with two recessive genes showing a brown dilution harlequin phase. As both the Khaki and the harlequin have the dusky / brown dilution and the sex linked genes then they have the brown rather than blue specula (wing feathers) . He advertised heavily as then in the days when the train delivered day olds the next day Adverts may be found in  Modern Poultry Keeping  Magazine, The Poultry Farmer , Poultry World, Country Life (1950's) etc and various others selling these and the Whalesbury  adverts :- WELSH HARLEQUIN Bonnett, Leslie, Ymwlch, Criccieth, Caerns. (Tel. : Criccieth 68.) . . . love the telephone number ! 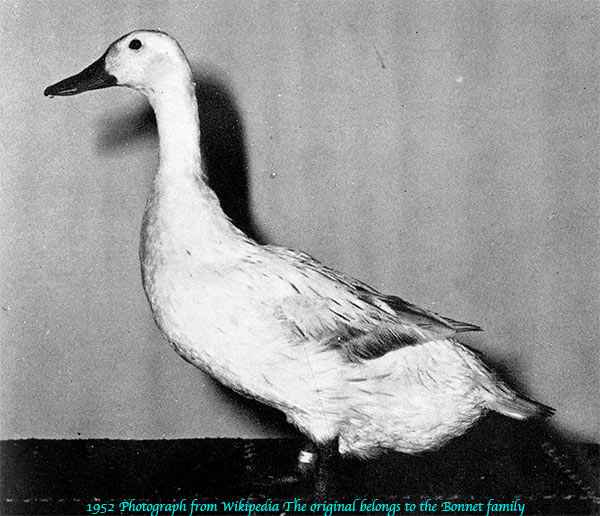