Names Also known as Les carnard du Nord in France / Les canards du Mertchem in Belgium
Country Of Origin;......... England
Carriage; deep keel which makes it difficult for this type to successfully mate naturally without a deep pond. Accidents have happened to males so please consider this before an eye watering sceneawaits and a vet trip.
Purpose;..........Eggs..Meat...Broody...a good utility duck
Egg Colour...................white ..large ( often blue in the USA)
Egg Numbers.............35-125
Breed Defects. .  Plumage other than white. Bill other than white (flesh pink).Heavy droopy behind.
Flying . seldom flies would be similar to an albatross long take off needed
Breed Hints....Kept as trio or pair .. will go broody and hatch but some are clumsy mums
Weights; 9 to 12 pounds
Breed Tip  ****They should be of horizontal carriage with a keel that is parallel to the ground.The bill is pinkish white or flesh coloured NOT ORANGE THAT IS A COMMERCIAL X breed. ie Plumage white . Legs orange = Cherry Valley
*****There are two types of Aylesbury- exhibition and utility. The pure or exhibition bird has a very deep keel which makes it difficult for this type to successfully mate naturally. The commercial type is often called an Aylesbury is able to mate naturally, especially if the birds are protected against obesity by being allowed to be active. and is in effect an Aylesbury /Pekin crossbreed with occasional nasty temperaments as found in 'meat' breeds destined for a short life.. can be nasty to other ducks
Breeding Tip   Kept as pairs or alternatively trios ..depending upon the drakes energy levels.They are one of the larger duck breeds and as such must have good access to water for mating on as they are too heavy and ungainly to mate successfully on land. For good fertility they need a rich and varied diet with plenty of greens as they are not as hardy as the other large breed possibly through a narrower gene pool due to their popularity as an exhibition bird.****  Young birds drop in depth with age so watch from the middle aged sag in very elderly birds as they spend considerable time swimming . . ie they need water deep , clean and little mud
Genetic profile/ Gene :White bill and skin/ symbol Y   Characteristic of the Aylesbury. Causes skin and bill  and skin be pink or white.. ie this is what defines the correct pure Aylesbury from the hybrid commonly known as an Aylesbury duck 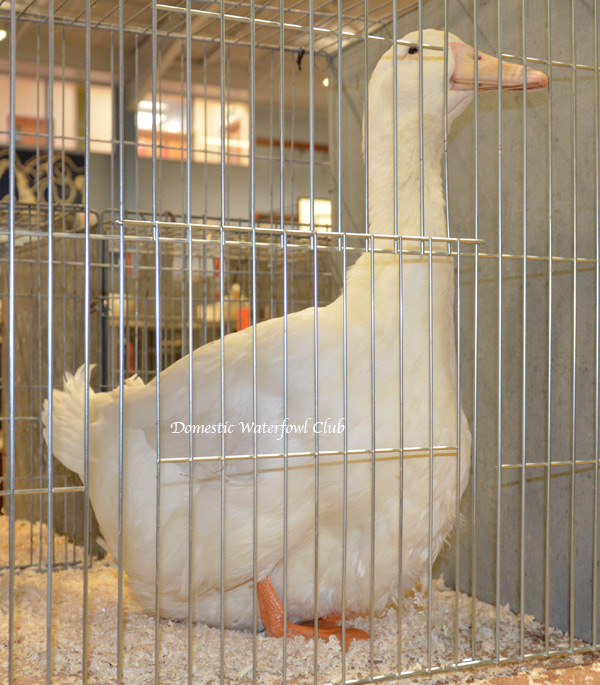 Yes it does fill the show pen ! 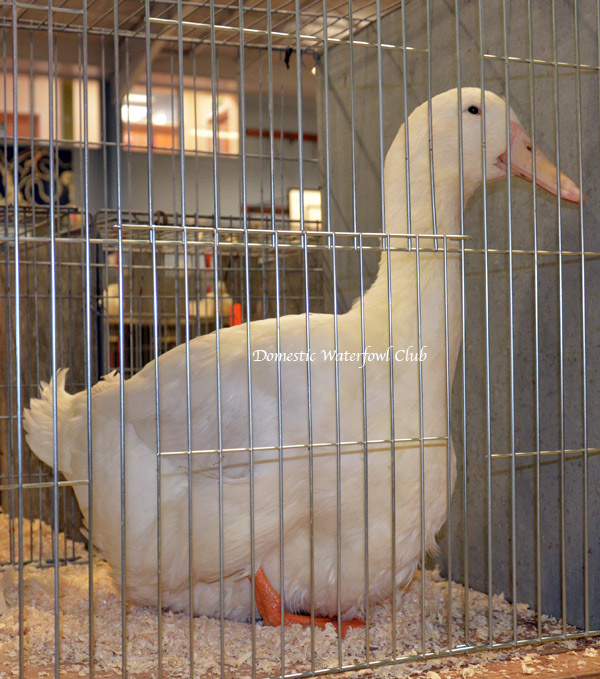 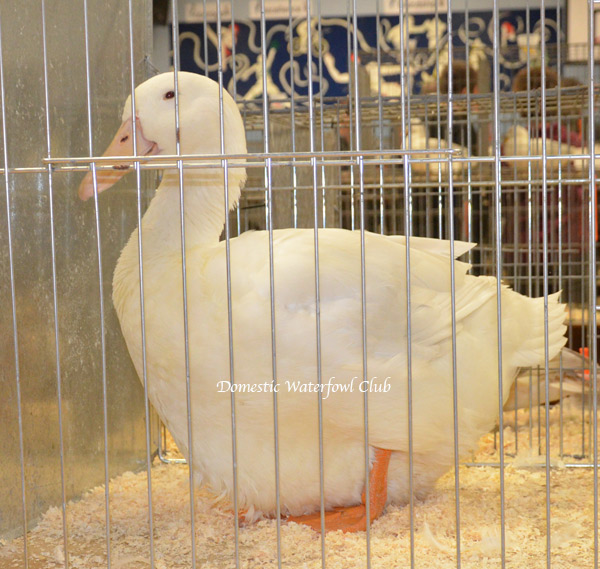 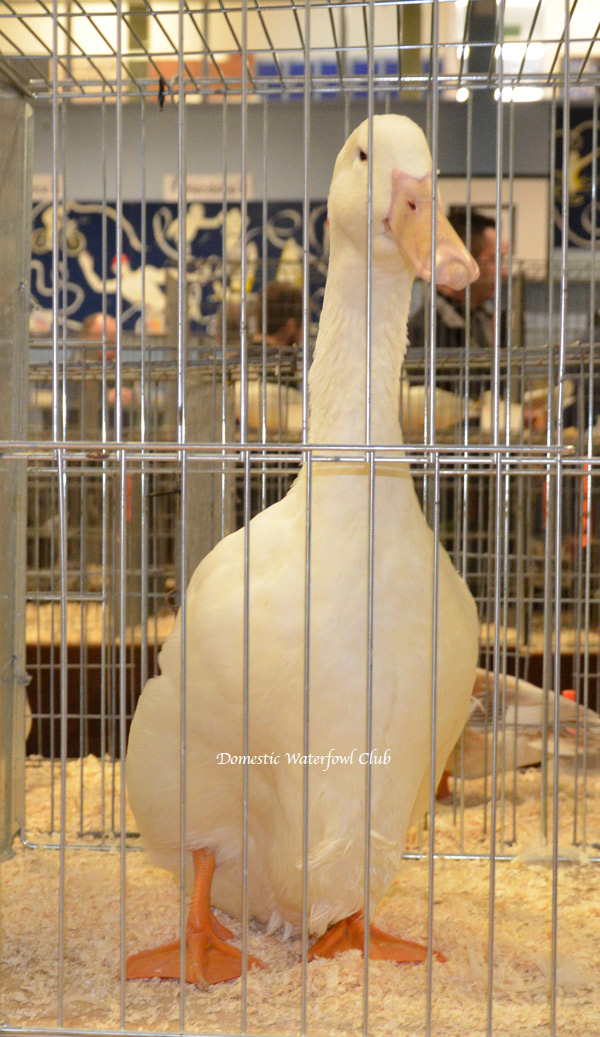 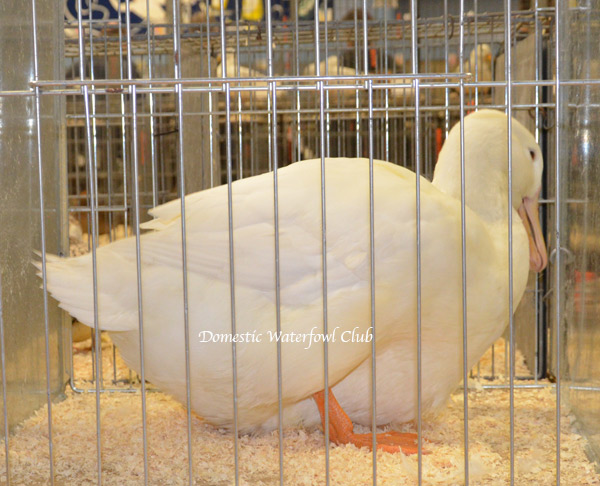 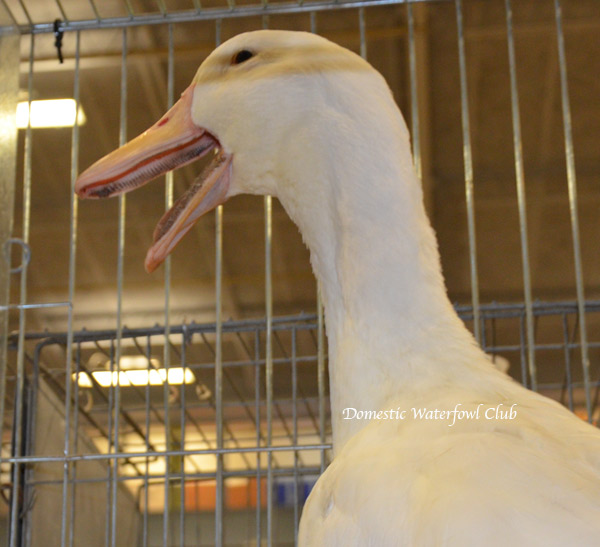 Showing off her pink bill ! 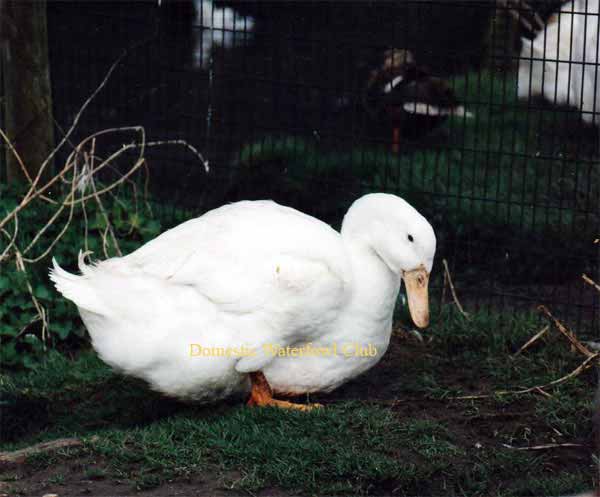 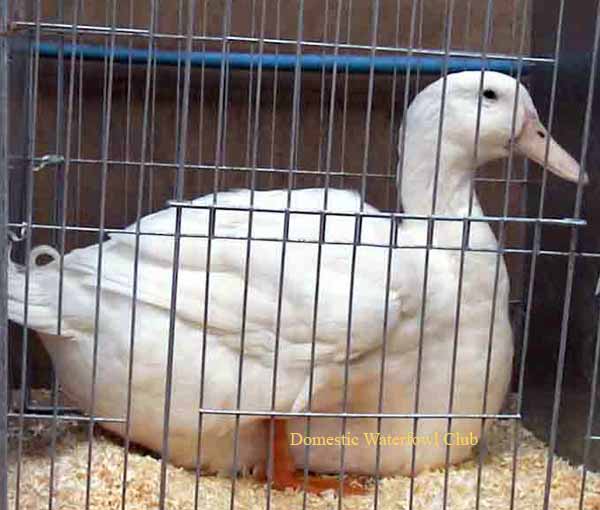 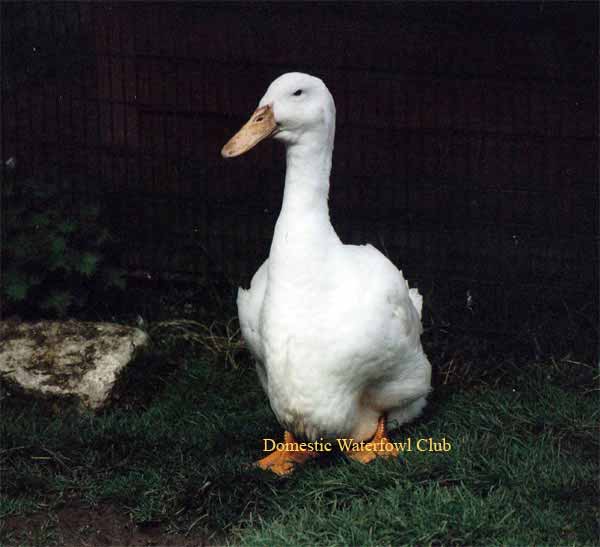 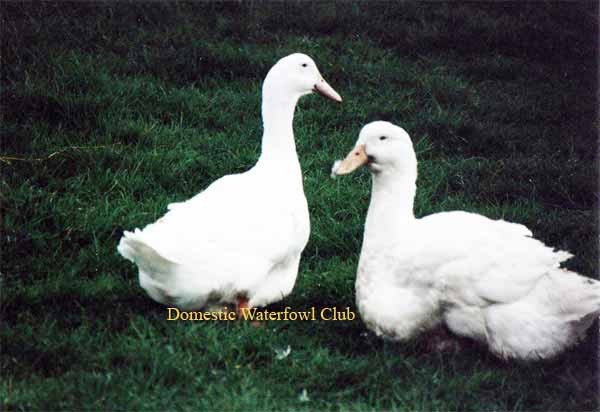 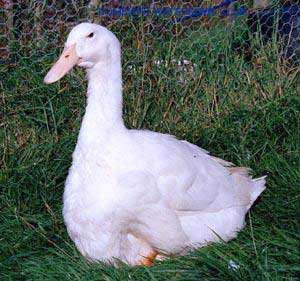 
Breed History; . . . Now one of our rarest Native Breeds . . . . . .. ..According to Lewis Wright in the 1880's the AYLESBURY ducks should be of the purest white with a bill set well up on the skull and the beak almost in a line from the top of the head to the tip (similar to the Runner) and of a delicate flesh colour . Although pure ducks exist and are thriving as a breed most of those that the general public perceives as an Aylesbury are commercial meat crosses which are frequently pictured in children's story books, normally Cherry Valley Ducks. They are recorded as first brought into  America by Mr John Giles of Woodstock Conneticut specifically to create an American  meat bird and by 1864 are well known as a breed and a crossing parent. ( Domestic Poultry by Saunders 1868)
Historically they were walked from the Vale of Aylesbury to London (40miles max). Each of the inns they stopped the night at allowed the birds to be kept in large enclosed yards and in the morning the birdswere driven through a cold sticky tarry solution in a shallow ditch and then through a layer of sawdust. This made somewhat crude shoes to protect their feet for the day and the next night this was repeated with a charge of a few birds at each stop. The alternative was to try to camp on the common or 'waste' and stop the local poachers from removing a few for the pot.
The breed is thought to have further evolved during the early years of the eighteenth century by selective breeding of the common duck, usually brown or grey in colour but occasionally white. Breeders were aware that the London dealers had a preference for white plumage, the feathers being popular on the continent as quilt-filling and the pale pink skin of a plucked white bird is somewhat more attractive than the yellow of coloured ducks.
Prior to 1839, the ducklings if not "walked" were transported to London by packhorse or carrier's wagon, the opening of the branch railway line from Cheddington to Aylesbury in that year providing a boost to theindustry. J. K. Fowler, writing in 1850, tells us 'oftentimes in the spring, in one night, a ton weight of ducklings from six to eight weeksold are taken by rail from Aylesbury and the villages round to the metropolis'. Throughout the nineteenth century the main market for duck meat was provided by the wealthy people of London, very little of it being sold locally. Aylesbury ducks start laying eggs in early November, the two month old ducklings coming to market from February whereas the Rouen, its main competitor, began laying in February, coming to market as a six-month old bird in the last three months of the year. Peak season for Aylesburys was therefore late March and early April, the Rouen being geared for autumn and Christmas.
The number of establishments in Aylesbury began to decline after 1850 due to a number of factors, including the introduction of sanitary regulations which made duck rearing in cottages difficult. The deterioration in the quality of soil in Aylesbury following many years of duck raising has also been given as a contributory factor.
In 1901 Wright says In one respect the Aylesbury duck has somewhat changed during recent years. As we remember it in 860, and for some years
afterwards, it was not what duck-breeders term " keeled " underneath the body. By degrees this character was more and more cultivated, from a desire to increase the massive look of the birds, and at the present day the Standard describes and requires keel—the term is self explanatory— in exhibition birds.

For More Information : The Aylesbury Duck by Alison Ambrose,published 1991 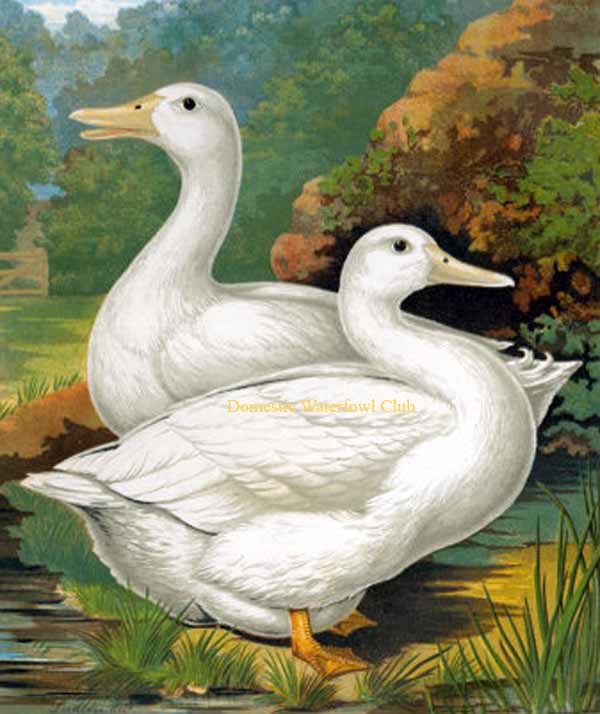 Lewis Wright  from The illustrated book of poultry : With practical schedules for judging, constructed from actual analysis of the best modern decisions / by Lewis Wright 1838-1905 Illustrations by Ludlow were in the first edition 1873 and the second in 1880 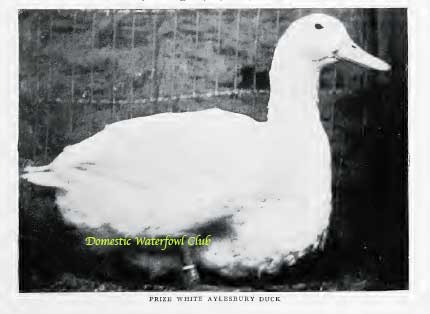