Breed History; . . . Abacot Rangers were further developedbetween 1917 and 1923 by Oscar Gray and often referred to as the Hooded Ranger in America but were initially a British breed that fell out of fashion ( the females have a 'hood' of fawn-buff feathers )  .  First mentioned in Europe in the the years following the war of 1914-1918. Known as Streicher in Germany and much of Europe and very popular in Eastern Europe as a dual purpose duck) They are one of the few breeds where the breed standards are virtually unaltered today. A reasonable layer and sitter with a differing bill colour in males and females similar to the Appleyards etc. making sexing after 8 weeks simple. They are a long lived placid breed unknown by many and getting rarer

Names. . .   Streicher in Germany and Eastern Europe. Hooded Ranger . . old Uk and US name : Le Canard Streicher ' in France/Belgium in some old Books Abcot
Country Of Origin;  ..Great Britain. An early 20th Century Breed mentioned from the 1920's onwards
Carriage;. . .  Similar to the Campbell ducks but a substantialy more well built duck ie useful for the table if needed ie chunky and slow(ish). Long lived I have 13 year olds still laying can get waterlogged in winter after 10 years old so watch out.
Purpose;...   .......Eggs..Meat...Broody... a good utility duck
Eggs.....................The eggs weigh 65 g and are white but do increase in size with age as per all ducks, many of my 10+ girls laid double yolkers useless to hatch but nice baked
Egg Numbers .............180 /200
Breed Defects. .    . . . .Drake .. Too dark a body colour; breast red running around from chest to stomach area, lack of lacing within feathers; brown head, incomplete or missing neck ring, defective wing bars, bright yellow bill, keel .
.. . . . . . .  . . . . . . . .  Duck; Eye Stripes; Coarse colour graining ie more resembling an Appleyard; white head (no 'hood'); grey wing bars; defective wing bars ; bright blue bill; Keel through crossing for size with an Appleyard
Breed Hint....   Kept as trio or pair .. will go broody and hatch. Long lived 10 years + is well known. Keen to lay in winter / very early spring so watch for  early broodiness
Weights. . . .5 to 6 pounds. This is an average size bird (weight of the duck: 2,5 kg; of the drake: 3 kg).
Breed Tip ****Easily confused as a duckling with mini Appleyards and Harlequins... easiest difference ... they are the greediest / largest / chubbiest until full feathering shows the difference in colour of the wing bars etc
Flying .      . .  like a brick. . .rarely flies a good back garden all rounder;
Genetic profile :Harlequin phase/symbollih /Recessive.   Recessive and allelic to both the dark phase and the light phase. The effects on plumage color are similar to the light phase but more exaggerated. On the Abacot the colouring is without the  without brown dilution of the Welsh Harlequin . Note the sex linked bill colouring 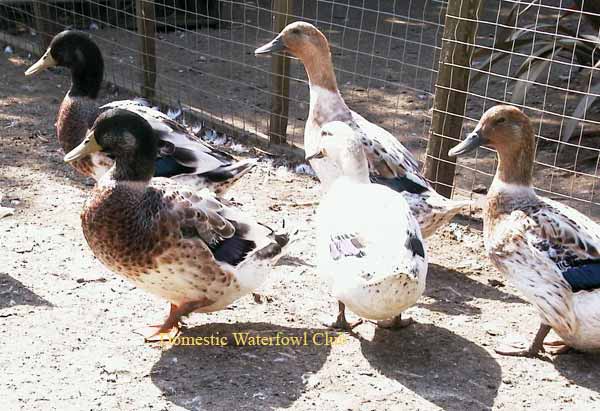 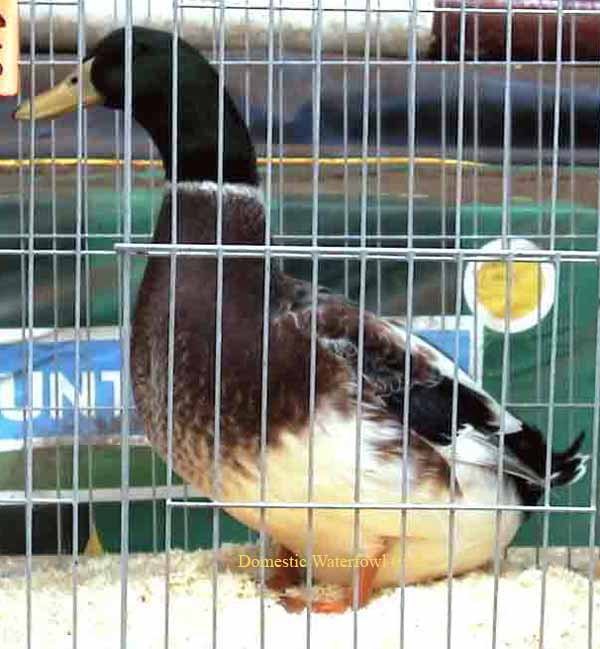 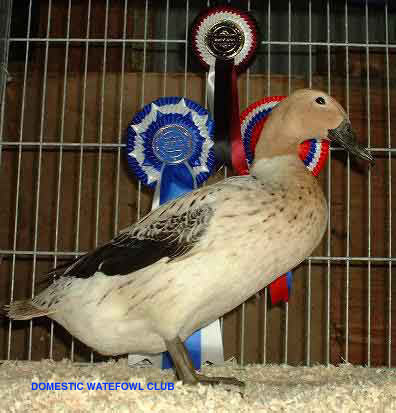 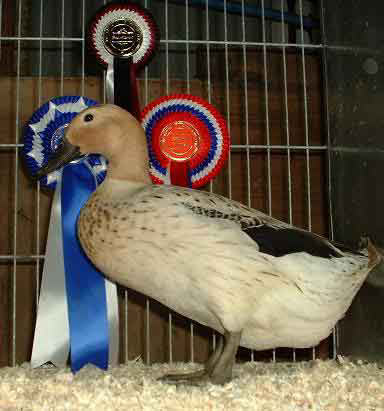