Other Breeds of  Ducks

This duck is named  for  forest-lez-Brussels where the breeder, Herman Bertrand  standardised then c 1900 . Its standard was adopted at the beginning of the century, but the First World War put  a serious brake on its development being played out within Belgium. The  originial variety  is the blue   and about 3kg anyone with some please contact the website  ( I want some, eggs okay/ birds better !).A self blue dual purpose breed
Main characteristics: front raised slightly; OCI long, blue in color; tarsi orange leather among the varieties Clear, orange brown dark and blackish palmures among the dark varieties. Different varieties: blue black border, blue Uni, black, chocolate, Pearl Gray, Pearl Gray stripe, white. Picture below from betesdecompagnie.forumactif.org 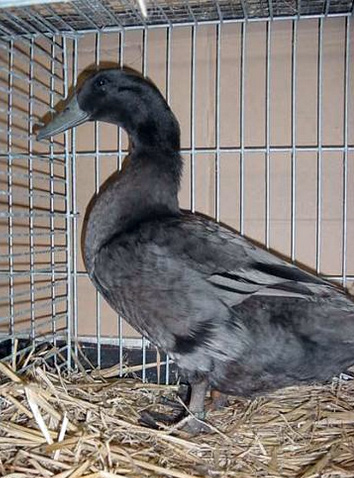 Coalby / Coaley Fawns. . .Introduced by Miss N. Edwards  c 1900 (  source Hicks Encylopedia 1921 )  Adverts appear in 1910 in  J.T Browns Poultry Encylopedia for the birds for sale from Miss Edwards at Coaley Farm with a somewhat artfully restyled picture ( ie painted pre photoshop) A sport from the Khaki Campbell in buff  with possibly some  Buff Orpington in the mix. Last heard of in the 1920/20's and not included within the Standards for the 1930's so obviously not known in numbers . Described by Roscoe p 38 of his book as so closely resembling a KC  that it would take an expert to distinguish them so . The had a darker head as in the Orpington but also a dark rump ,  no bib, no eystripe and a more upright carriage showing some Runner input  PLEASE stop asking to buy them  they could be recreated !

and sorry no pics found