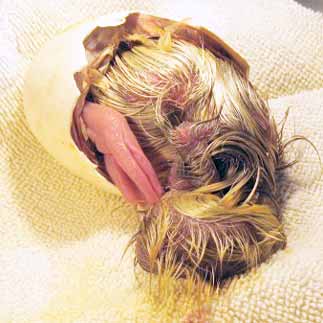 Rare in humans, aspergillosis is a common and dangerous infection in birds. Mallards and other mallard line ducks are particularly susceptible, as they will often resort to poor food sources during bad weather. It can be acute in chicks, but chronic in mature birds  ie the adults carry the disease and pass it on to their offspring. Severe outbreaks usually occur in birds 7–40 days old. High mortality rates are seen in chicks and poults that inhale large numbers of spores during hatching in contaminated incubators or when placed on mould-bearing litter. In older birds, infection is caused primarily by inhalation of spore-laden dust from contaminated litter or feed or dusty range areas. Morbidity can be underestimated in finishing meat  flocks until slaughter inspection reveals pulmonary lesions. An affected duck or duckling will have labored breathing, although that can also indicate pneumonia. You can treat aspergillosis with a fungicide, but it will not normally  be successful. Keep living areas clean and dry and you should be able to avoid this infection. Also be careful with the ducks’ feed. Store it in a cool, dry place and never use feed that has gone mouldy. Ducks can get aflatoxin poisoning from a mould that grows on grain. Ducks are very susceptible to the mould’s toxin and even small amounts can be fatal.

Aspergillosis has been the culprit in several rapid die-offs among waterfowl with data kept mainly in the USA rather than in the UK. From 8 December until 14 December 2006, over 2,000 Mallards died in the Burley, Idaho area of the USA, an agricultural community approximately 150 miles southeast of Boise. Mouldy waste grain from the farmland and feed  in the area is the suspected source. A similar aspergillosis outbreak caused by mouldy grain killed 500 Mallards in Iowa, USA, in 2005.

Treatment of affected birds is generally ineffective. Spontaneous recovery from pulmonary aspergillosis can occur if re-exposure to the mould is prevented. Strict adherence to sanitation procedures in the hatchery minimizes  outbreaks. Grossly filthy  or cracked eggs should not be set for incubation, because they enable bacterial and fungal growth and may explode and disseminate spores throughout the  machine. Contaminated incubators ( ie after suspecting  this  ) should be thoroughly cleaned and fumigated with enilconazole or formaldehyde. Avoiding mouldy litter or pens serves to prevent outbreaks in older birds. Cleaned pens should be sprayed or fumigated with enilconazole following label directions, and all equipment should be cleaned and disinfected.. . jeyes fluid works. If in doubt re bedding if it smells mouldy do not use it shredded newspaper or in sheet form is often better for babies  as they catch it from mouldy bedding very very quickly !

There is no connection between aspergillosis and the H5N1 strain of avian influenza (commonly called "bird flu"), rapid die-offs caused by aspergillosis can spark fears of bird flu outbreaks. Laboratory analysis is the only way to distinguish bird flu from aspergillosis. as with all things waterfowl major numbers dying together ask the vets advice